I’ve read a lot of personal essays, and read a lot about them, but I’m not sure I’ve ever written one.

I say ‘not sure’ because I’ve maybe written quite a few in notebooks, or written words that could be turned into an essay, but have never tried to actually produce one that might be published.
I’d like to try that, and have been thinking about giving it a go this year. One obstacle is voice: Who is writing the essay? Is it me, or some kind of essay-writing version of me? And is it a voice that speaks the truth, or a version of it?

Today I came across an interesting interview with Carl H. Klaus, an essay writer, theorist on the craft of the personal essay, and author of “The Made Up Self” (via here). He says something interesting on this question of voice:

“I do think there’s some double-edged quality in writing personal essays – because despite the fluid nature of the self, we do in the long run develop a conception of our selves that we aspire to be true to in our own writing.  And yet I know that such a thing is impossible.  To think that I could in fact create a style that was an echo of such a multi-sided thing as the self – that’s simply a cuckoo notion.  So what can I say?  We do, in fact, aspire to write like ourselves even though we know that in some sense this is an impossibility – much as it’s a difficult notion to imagine never being yourself and yet always being yourself.  It’s a paradoxical thing.”

The full interview is worth reading, especially for what he says about Montaigne, which I think I disagree with.

Because I spend so much time on my own, at my desk, writing, with nobody else in the house apart from the dog, people often ask me whether I get lonely. I don’t, usually.

This isn’t because I’m an antisocial misanthrope. I enjoy company, mostly. The reason I don’t get lonely is that I am writing. This might sound contradictory, but I came across a Julia Cameron quote yesterday that explained it well:

“The minute I let myself write, everything else falls into balance. If I get a dose of writing in my day, then I can actually socialise with a clear conscience. I can actually be present for the life I am having rather than living in the never-never land of the nonwriting writer, that twilight place where you always ‘should’ be somewhere else – writing – so that you can never enjoy where you actually are.”

Reading that reminded me of something James Thurber said in an interview:

“I never quite know when I’m not writing. Sometimes my wife comes up to me at a party and says, ‘Damnit, Thurber, stop writing.’ She usually catches me in the middle of a paragraph. Or my daughter will look up from the dinner table and ask, ‘Is he sick?’ ‘No,’ my wife says, ‘he’s writing something.’” 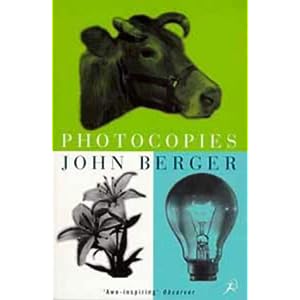 I bought someone a Kindle for Christmas, or contributed my share of the cost. A useful gadget, but I prefer to have all my books where I can see them, on the shelf.

I was looking at one of those shelves late last night, from the comfort of my chair, and pulled down a copy of Photocopies, by John Berger. This is a stunning book, which I bought some 15 years ago and have read many times. It blurs the lines between fiction and non-fiction, and, importantly, always inspires me to write.

Berger is English, but left this country to live in France four decades ago. Why? He gives a fascinating answer in the interview below. He never felt at home in England, he says. Whenever he talked to people or listened to them, he felt he embarrassed them. “I was indecently intense,” he says.

(relax, only the first 10 seconds are in French)

Yesterday was my first day back at work. Over the holidays, as usual, I spent a lot of time thinking about how to balance my working day, how to mix my different responsibilities. The aim, as always, is to find more time to write. Because if I had more time to write….ah, well.

How much money does it take to be happy? Ask anyone that question and they’ll usually answer with a figure that is just a little bit more than they earn now. The amount of money they need is always just out of reach.

The same applies to me and writing time. If I just had a little more… And then I read these wise words from Julia Cameron:

“The myth that we must have ‘time’ – more time – in order to create is a myth that keeps us from using the time we do have. If we are forever yearning for ‘more’, we are forever discounting what is offered.”

I felt a shiver when I read that. She continues:

“The ‘if-I-had-time’ lie is a convenient way to ignore the fact that novels require being written and that writing happens a sentence at a time. Sentences can happen in a moment.” 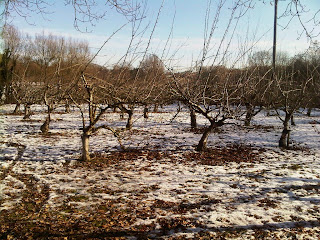 A Boxing Day walk through the frozen pear orchards. 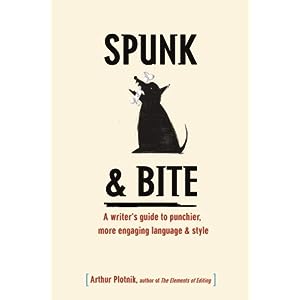 I was just reading an interesting blog post from Alex Keegan and came across this great quote from Arthur Plotnik:

“You write to communicate to the hearts and minds of others what’s burning inside you. You edit to let the fire show through the smoke.”

Choose one and get writing. Easy.

Writing can sometimes be very difficult. How’s that for an understatement? But how hard, or easy, is it meant to be?

Here are three very different reports from the coal face of the writing industry:

“The fact of the matter is that the people who struggle most with writing are drunks. They get hammered at night and in the morning their heads are full of pain and adverbs. Writing is hard for them, but so would golf be, or planting alfalfa, or assembling parts in a factory.”

2) While over at Columbia Journalism Review Robert Boynton interviews the painfully unproductive Gay Talese and reports how:

3) Meanwhile, in the Guardian, Orhan Pamuk reflects on the joys of putting words on paper:

“If you leave aside sensual pleasures, sexual pleasures, good food, good sleep, and so on, then the happiest thing is that I have written two and a half, three good pages. I am almost assured that they are, but I need confirmation. My girlfriend comes, we are happy, I read to her, she says, ‘This is wonderful’ – that’s it! That’s the greatest happiness.” 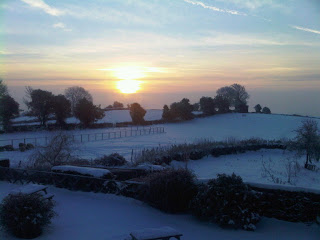 This is what we could see yesterday from the window of our Devon holiday cottage. Winter Wonderland. 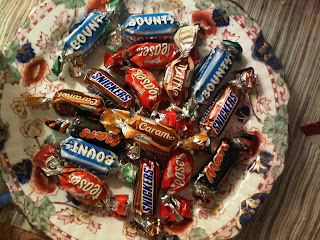